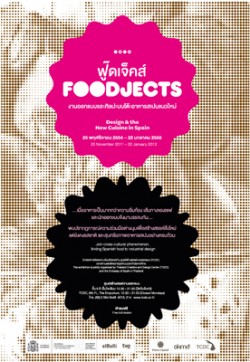 RSVP for นิทรรศการ Foodjects: Design & the New Cuisine in Spain to add comments!

Come experience the new design and explore a cross-cultural phenomenon of the new Spanish cuisine, from its dynamic culinary tradition to today’s gastronomic innovations.

The new Spanish cuisine has revealed itself as one of the world’s most creative and surprising, a success linked to a culinary tradition as rich and as varied as the country’s landscapes. Food in Spain is a pretext for reunion and fiesta. Restaurants, bars and terraces are bustling places where they express their Mediterranean character. Spanish chefs understand cuisine as a language, a means of expression using the new culinary technologies to arouse sensations and emotions, and daring initiatives which leave no-one indifferent, which provoke discussion and debate.

This passion for cuisine has mobilized many sectors: companies producing kitchen and household tools, restaurants, food products, publishing houses, the media. Cuisine has never been discussed so much or so passionately in Spain. Spanish design has of course collaborated in this phenomenon, designing products and spaces; in this way generating a new image of this country’s cuisine. This new cuisine needs tools to express itself and present its revelations: deconstructed dishes, foams, spherifications, cooking with liquid hydrogen.

Many plates are designed for a specific dish, but the opposite can happen too, as the presentation of a recipe may be conditioned by a particular support. Chefs and designers collaborate to provide new formats for food, to appreciate the textures, the flavors, the contrasts or the aromas. Cross-culturalism takes on great importance in this process, but at the same time typically Spanish dishes and foods are recovered and astonishingly updated, for example the deconstructed potato tortilla or olive caviar. Eating has been made a sensorial and intellectual experience in which the sense of humor and surprise play a major role.

The exhibition is jointly organised by the Thailand Creative & Design Center (TCDC) and the Embassy of Spain in Thailand.