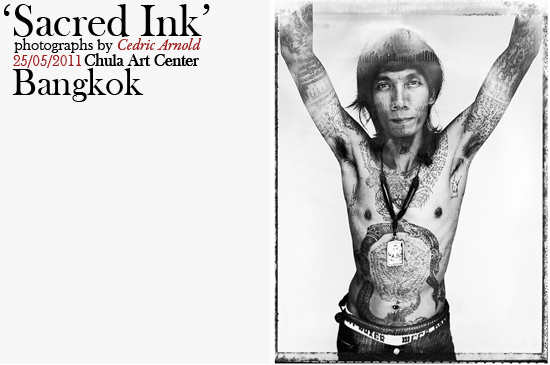 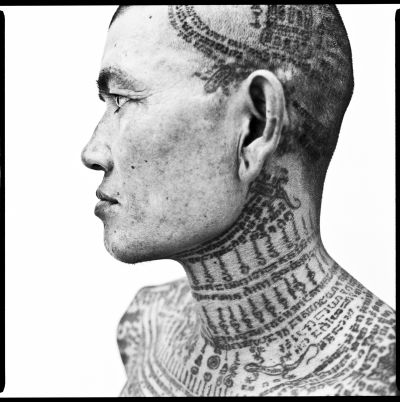 Comment by NEWS PORTFOLIOS*NET on May 10, 2011 at 5:07pm
Sacred Ink
A photographic and multimedia installation exhibition by Cedric Arnold
At The Art Center, Center of Academic Resources, Chulalongkorn University
May 25 – June 25, 2011
Opening Reception: Wednesday May 25, 2011, 6-8pm
A body, used as a canvas, every inch of skin filled with sacred text and figures of mythical creatures, all forming a protective shield. A boxer, a monk, a construction worker, a policeman, a soldier, a taxi driver, a shipyard worker, a shaman, a tattoo master, men and women and their inked protection from evil spirits and bad luck. Enter the world of Thailand's spiritual “Yantra” tattoo tradition.
From first chance encounters over three years ago with a shipyard worker completely covered in yantra tattoos, a young Iggy Pop-like taxi driver, or a fierce-looking market trader, photographer Cedric Arnold began taking portraits of these inked men and women as a personal project with the use of large formats as well as Polaroid cameras. Soon, it grew into a long-term venture, exploring this unique subculture, its rituals, symbols and people.
Known in Thai as "sak yant", the sacred ink is believed to have mystical powers. Each design and text has their own meaning, intended to be placed at specific locations on the body. The tradition is a testament to the complex spiritual makeup of Thai society, incorporating elements of Buddhism, Animism, Brahmanism and Hinduism.
‘Sacred Ink’ features over 45 large format black-and-white photographs taken in Thailand, as well as sound, video and multimedia projections bringing us further into the world of spiritual tattoos.
About the Photographer
Born in 1976, French-British photographer Cedric Arnold first picked up a 35mm camera at university, whilst studying linguistics and history in Paris. He quickly turned most of his attention to photography and filmmaking, taking extra credits in printmaking, the history of cinema, and documentary filmmaking.
After graduating, Cedric moved to London to present his work. He started freelancing for agencies and magazines, splitting his time between London and Northern Ireland, later joining the agency Sygma. Trips to Thailand and Cambodia soon persuaded him that a move to South East Asia was what he wanted. Cedric eventually made Bangkok his base in late 2001, and has since been producing work for international publications as well as for exhibits; working with clients such as The New York Times, Wall Street Journal, the Rotary Foundation, Cartier, and The National Geographic Channel. The ‘Sacred Ink’ project was photographed with a wide array of camera systems ranging from large format to Polaroid cameras as well as square format and modified cameras.
Honors and Awards:
2010
The Black & White awards:
3rd Place in Photojournalism
3rd Place in Sport
Asian Geographic Best of Decade Award for "Tattoo Magic" feature
2009
Nominated for IPA award
Nominated for Black & White Spider Award
For more information, please contact:
Siriwat Pokrajen (PR Officer)
Tel:081-629-0457, email: siriwatpokrajen@yahoo.com, info.artcenterchula@gmail.com