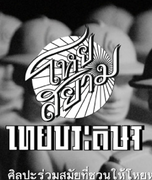 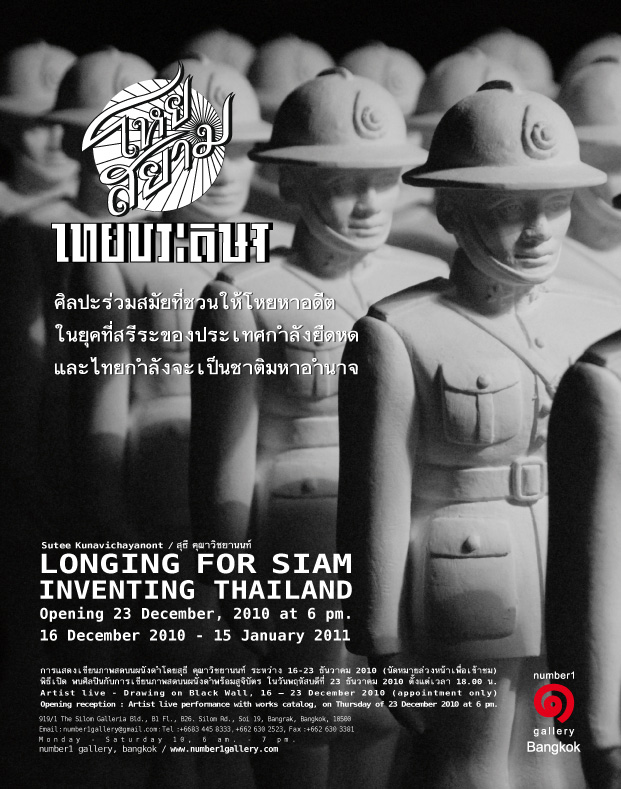 Number1Gallery proudly presents Longing for Siam, Inventing Thailand, by Sutee Kunavichayanont an exhibition of contemporary art that yearns for a past when Thailand, her borders constantly shifting and indeed sometimes contracting even as she sought territorial expansion, was on the brink of becoming a powerful nation.

Sutee Kunavichayanont is a leading Thai artist who first came to prominence in 1998 with his elephant, buffalo and tiger-shaped breath donation sculptures crafted from rubber. A second seminal series, History Class, was begun in 2000. Interactive, the series, appearing in several forms from the turn of the century, is composed of re-appropriated children’s wooden school desks that the artist has engraved with scenes illustrating Siamese/Thai history. Extending an invitation to all viewers to make rubbings from the engraved surfaces of the desks, Sutee is in fact giving his audience the opportunity to produce their own Thai political history text books.

Sutee had participated in several significant international art events such as 1st Liverpool Biennial of Contemporary Arts (1999) in the United Kingdom, and the 5th Asia-Pacific Triennial of Contemporary Art, Brisbane, Australia (2006). His works are in the collections of prominent art museums and galleries worldwide including the Mori Art Museum, Japan, The Fukuoka Asian Art Museum, Japan, the Singapore Art Museum, Singapore, and the Queensland Art Gallery, Australia. In 2006, Sutee received a prestigious Manas Siensing Red Award 2 from the Pridi Banomyong Institute for his outstanding artistic creations and art related contributions.

Longing for Siam, Inventing Thailand, is a solo exhibition featuring Sutee’s latest body of works. With these new works, the artist invites viewers to look back at “Thai Mai” (New Thailand) from the 1930s to 1940s, a period when national unity was being built, the government using art to construct the nation. The show aims to offer a flashback to a time when the Kingdom of Siam’s early borders were being drawn. And during those years when the Kingdom’s physical outline was evolving, the “hats and shoes” were striving to make Thailand a powerful nation and extremely patriotic state.

Longing for Siam, Inventing Thailand is an installation comprising 600 small plaster soldiers, stop-motion video projections, and a video performance of the artist drawing on a huge black wall. The installation is presented in a setting designed to evoke the historical period preoccupied with the leadership’s slogan “Mala Nam Thai Soo Maha Umnaj” [The hats that lead Thailand to become a great nation.]. Viewers will be encouraged to participate in national map-making in an atmosphere that, thanks to old patriotic songs and tunes, recalls those long-ago times.