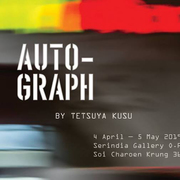 AUTO-GRAPH, a new exhibition at Serindia Gallery, opening Thursday 4 April, presents the latest works by photographer Tetsuya Kusu. The series of photographs was taken from the moving automobile on his road trip thousands of miles along the US West Coast and ultimately severely rear-ended. Smart and surprising, AUTO-GRAPH revolves and reveals his artistic instinct and dedicated self.

Artist statement:
I have been trying to understand myself by recording and saving moments that remind me that I am alive. Many different things have happened in my life - experiencing three earthquake disasters and two terrorist attacks, I have also had a few other close encounters with death, and I was homeless for three and a half years, mentally exhausted. It was surely a hard reset in my life. Going through all these things made me wonder why I am still alive today, and to me, recording my life with photography is exactly like taking portraits of myself. In Autumn 2016, I bought an automobile and drove a few thousand kilometers along the West Coast of the United States in order to promote my newly published photobook. During the road trip, I installed a camera with a tripod in the front passenger seat in order to record the process. I kept the window open, faced the lens outwards and set the camera to an automatic program which would make the shutter go down every 15 seconds. It was important for me not to have control of the shooting process, since I wanted to do a pure documentation. All these auto-graphs have captured the whole process of the trip, and at the end of the each day I would pick an image out of the vast amount of automatically saved photographs, as a practice to recognize my own existence. During this trip, I witnessed how Trump was on his way to being elected as the President of the United States, and it made me strongly realize how the world is inevitably going to be changed. My road trip unfortunately had to end as I was rear-ended by another car. It once again reminded me how life is often determined by predestinated circumstances. Although I have been through several life-threatening events, I have been kept alive until today. As long as I am being kept alive, I would like to continue observing this life, full of intrigue and mystery.

Based in Kamakura, Japan.
After graduating from university, Tetsuya Kusu took off on a journey that would take him across Eurasia. His final stop on this journey was a small island in Thailand which became his second home. While working there as a diving instructor for 6 years, he fell in love with photography honing his craft, shooting various underwater photos. After returning home to Japan, he started working independently as a photographer focusing on underwater, resorts, architecture, portraits, and cultural photos for magazines and advertising mediums. He quit commercial works, and started creating works on a project basis from 2014, continuing the announcement at home and abroad.