นิทรรศการ "The World Through His Eye" 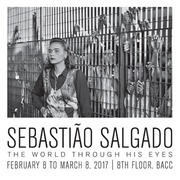 RSVP for นิทรรศการ "The World Through His Eye" to add comments!

Sebastião Salgado is one of the word’s greatest living photographers. In the past three decades, he has traveled to more than 100 countries for his photographic projects. Breaking down barriers, he lives with his subjects for weeks, immersing himself in their environments. He sees himself as a participant entering their story. Within a single frame, he captures the fragility and the fortitude of the human spirit.

For his first major exhibition in Thailand, the photographer presents iconic black-and-white images from his most influential series: Workers (1986–1992), Exodus (1993–1999) and Genesis (2004–2011). A portfolio of his silver gelatin prints titled Other Americas will also be on view. From hauntingly beautiful images of disappearing landscapes to scenes chronicling the mass displacement of people across the globe, each of his works is infused with empathy and respect.

Sebastião Salgado has been awarded numerous prominent photographic prizes in recognition of his accomplishments. He is a UNICEF Goodwill Ambassador, and among other distinctions, an honorary member of the Academy of Arts and Sciences in the USA. Touring exhibitions of this work have been, and continue to be, presented in museums throughout the world. In 2013 the book De ma terre à la Terre (From my land to the planet), a narrative account of Salgado’s life and career, was published, and in 2014, the documentary film The Salt of the Earth, directed by Wim Wenders and Juliano Ribeiro Salgado was released.

Together, Sebastião and his wife Lélia have worked since the 1990s on the restoration of a small part of the Atlantic Forest in Brazil, in Minas Gerais. In 1998 they succeeded in turning this land into a nature reserve and created the Instituto Terra. The Instituto is dedicated to a mission of reforestation, conservation and environmental education.