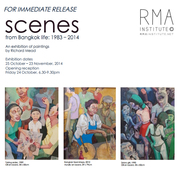 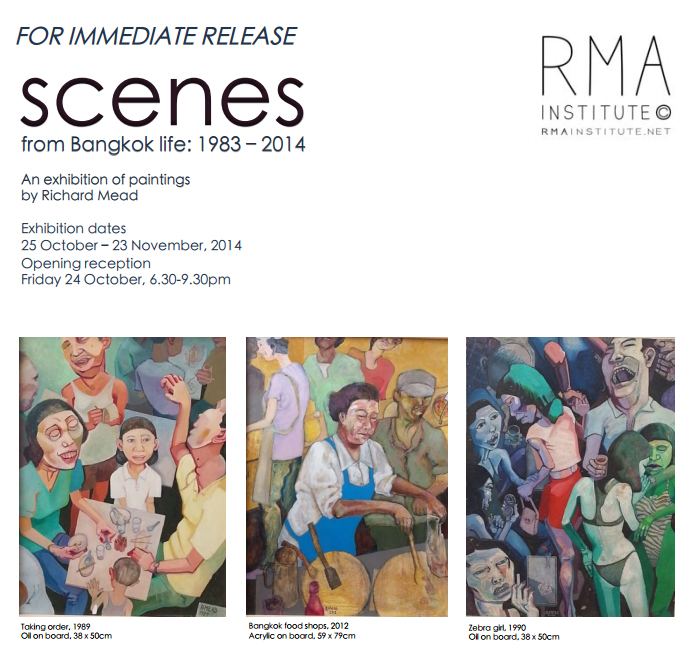 The spirit of Bangkok lies in its people. Each painting in this exhibition documents the domestic life of our city. It reminds us of our everyday richness, nuances and complexities. SCENES is a celebration of the Thai people. In our displays of generosity and of glamour, these images reflect the contracts that we make within the environment.

SCENES tells the story of an English man looking at Bangkok. Colourfully depicted, his paintings reflect a curiosity towards a world in which he knows both too much and too little about. The first images, created at the time of great social change in the 1980s, capture people engaged in new economic activities. The spirit of trade was infectious. Here is the bustle of the street, of girly bars and of restaurants. More recent work has a broader basis. A street dog protects it's territory, patients and staff hustle over space in a hospital ward, the restaurants show a new affluence. These paintings reflect a new era of change in Bangkok. For the artist, it mirrors his need to paint with greater urgency.

Richard Mead has been making paintings of Bangkok life for over 35 years. He is self-taught painter. This will be his first ever solo exhibition in Thailand. Richard was born in the United Kingdom. He has had a far reaching international career. He has taught, lectured, researched, worked as a theatre designer, written a novel, plays and several textbooks. He has explored different political parties and stood for parliament in 1997. He has had one previous solo exhibition, at the Rupa Gallery, Malaysia. Back in Thailand his increased productivity was interrupted by brain disease in 2012. On emerging from hospital he resumed painting in acrylics of new subject matter and with a new intensity. He has now retired from academic teaching and is based in Bangkok. Richard is married to Kullada Kesboonchoo Mead and they have a son.