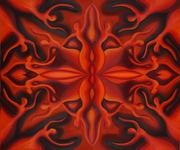 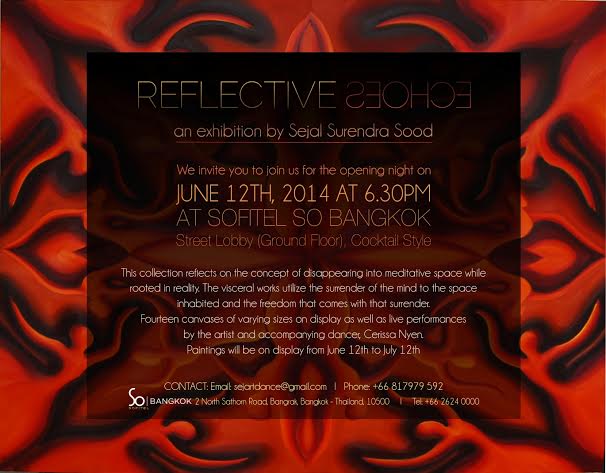 At Sofitel So Bangkok

Using repetitive movement as a starting point for this latest series of oils on canvas, Sejal

in reality. Her visceral works utilize the surrender of the mind to the space inhabited at

that point of time and the freedom that comes with that surrender. A classically trained

dancer, Sejal channels the meditative state induced through her movements to blur the

The artist explores three concepts: reflection through repetition; freedom through

repetition; and becoming one with the space, hence Reflective Echoes. The

repetition (of the spinning dance move) gives her the knowledge, the comfort and the

confidence to repeat over and over again the same movement, much like all in nature.

time’ spring from; movements that are sometimes blurry and at others sharp echoing the

Her focus essentially is the universality of movement, its relevance to life and the sheer

beauty of it. A part of repeating a movement is in the surrendering, letting your body take

over, letting your entire being just exists and move without any instruction - something

that we all do but never stop to think about. Sejal pauses long enough to transfer these

An MIT trained mathematician Sejal also delves into her Indian heritage for inspiration.

Her vision is also influenced by the power of mathematics that is her first love. To

that of any music, because it gives in absolute perfection that combination, characteristic

of great art, of godlike freedom, with the sense of inevitable destiny; because, in fact, it

constructs an ideal world where everything is perfect but true.”

July 2014 at the Street Lobby on the ground floor of Sofitel So Bangkok. 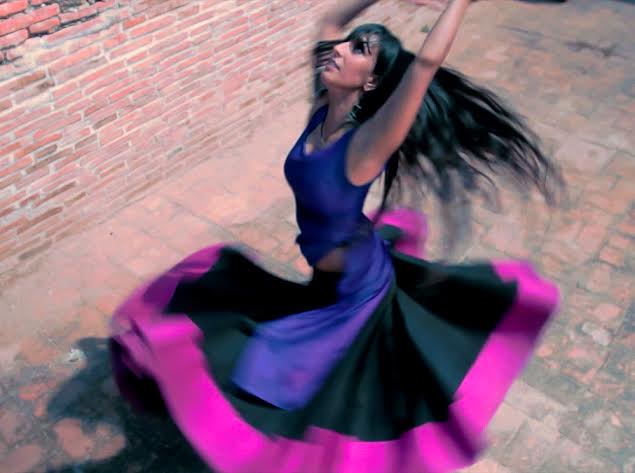