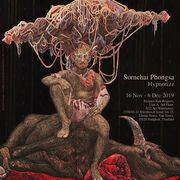 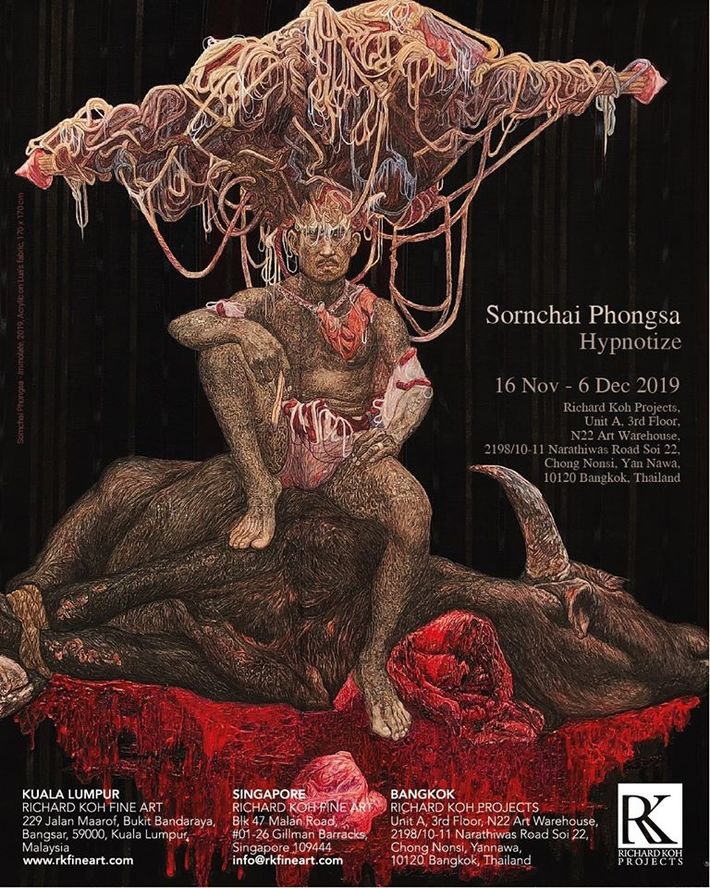 Richard Koh Projects is pleased to announce Sornchai Phongsa’s (b.1991) first solo exhibition in Thailand, Hypnotize, scheduled to run from 16 Nov – 6 Dec 2019. The artist will present 5 recent works including 3 paintings on Lua fabric, 1 drawing on paper and an installation piece consisting of string & terracotta.

Sornchai developed his artistic identity from his interest in ethnic diversity. His works reflect the relationships between humans, their beliefs and community through the distinctive presence of local materials in installation art and painting. In Hypnotize, Sornchai revisits his long-standing fascination between human behaviour and ‘invisible identities’, specifically the relationship between animistic beliefs and the ethnic traditions of the Lua people – an ethnic Thai group in which the artist belongs to.

In this body of works, Sornchai critically examines the Lua’s spiritual belief system, called Lua’s Spirits Totem, and how they inhabited the physical realm. It is the belief within this system that males are regarded as the gatekeepers of the faith and venerated defenders of cultural heritage. In Hypnotize, Sornchai seeks to disrupt this old system of belief that has controlled the hearts and minds of the Lua people, through his critical juxtaposition of the prideful male and spectacle of theatrics, to legitimize their social standing in the community.

The series’ flesh colour palette draws reference to a Buddhist folklore where Lord Buddha saved a village from meat hungry giants by striking an agreement between them; that buffalos will be offered to the giants as meat sacrifice by the villagers. At its core, Lua’s Spirit Totem is an amalgamation of Animism and Buddhism, and the buffalo sacrifice represents the compromise between both sets of belief system. Through these works, Sornchai seeks to understand the myth and unpack the moral implications of long-held traditions within contemporary society.