The Feather and the Shadow (Glass Art) 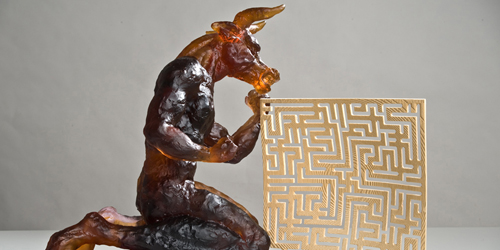 The Feather and the Shadow is an exhibition of drill engraved images on glass created by Dominic Fondé. The images depict a variety of birds both roosting and in flight. Birds and feathers have long held a fascination for Dominic; he often uses them in his work as metaphors for communication, the search for new ideas and reflections on modern life. The work in this exhibition makes particular use of the fact that glass is transparent, allowing the engraved lines to create shadows that fall on the wall. The eye reads the shadow image rather than the actual engraved image. The result is a modern take on a process with a long and venerable history.

Drill engraving is a relatively modern engraving technique. A diamond tipped burr is placed inside a small pen sized drill, roughly equivalent to a dentist drill and used to incise lines, patterns and even texts onto any glass surface. As the engraved line is always white on a clear background traditional values of light and shade become inverted. Dominic has been experimenting with lighting conditions used to cast shadows from the engraving. The result is a thoroughly modern interpretation of engraving.

As part of The Feather and Shadow he will present a talk and a demonstration of glass engraving to visitors to the Gallery. Exact date and time to be announced later – please contact the gallery for details.

Dominic Fondé is a professional glass artist who has been working with blown and engraved glass art for over ten years. He has many of his artworks in public and private collections in the United Kingdom and other European countries. His public commissions notably include a series of engraved art glass windows at the Birmingham Botanical Gardens. In 2006 He relocated to Singapore and in early 2008 founded Dominic Fondé Glass Art and also became a partner in Art Glass Solutions. Recently he was commissioned by Givenchy and Versace to engrave perfume bottles.

RSVP for The Feather and the Shadow (Glass Art) to add comments!