นิทรรศการ "THE ENIGMA OF ORDER" 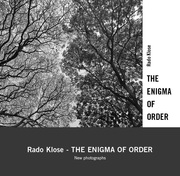 THE ENIGMA OF ORDER by British photographer,

Eat Me Restaurant is very pleased to announce an exhibition of new works by British photographer Rado Klose. Taking a cue from the human instinct to find pattern in the seemingly random, Klose’s photographs explore the man-made environment in a manner akin to the recognition of constellations among a sky full of stars.

Klose’s practice was initially based in photographing people but in our era of the pervasive presence of the ‘selfie’, the photographer began to shift his lens to how we construct our physical world and the traces we leave on the land. Not an academic study of places or monuments, Klose relies on the chance encounter to fuse external experience with states of mind. The Enigma of Order is a series of works shot in Thailand and suggest themes of religion, work, death and companionship, where glittering elements cohere into a compelling whole.

Influenced by important historical photographers such as Henri Cartier Bresson and Walker Evans, Klose also draws from less venerated sources. The Oddness of Order is a visual meditation on the often overlooked, but sometimes sacred, details that reflect our sense of self, our lives, and beliefs.

Rado Klose was born in Cambridge and spent his childhood in a small village. The son of a German refugee, a veteran of the Spanish Civil War, and an English mother, he grew up in an intellectual and strongly leftwing household. It produced in him a sense of separation from the local community and a lifelong sense of not quite belonging to a particular culture. Klose consequently possesses an outsider's eye, and values detachment.

From a village school to the relative cosmopolitanism of Cambridge, Klose began to explore his conflicted interest in art and science. He began taking photographs with Kodak box brownie until his father gave him a professional camera in his teens.

At the age of 19, the burgeoning photographic artist moved to London. Klose was a founding member of Pink Floyd and, after studying architecture briefly, graduated in the natural sciences. Further to self-study and practice, he worked freelance for the Times Newspaper Group but a change of direction brought him to concentrate on his personal interests in photography. Klose exhibits extensively and is currently researching the possibility of a visual account of his father Helmut’s travels in 1930 Europe.

RSVP for นิทรรศการ "THE ENIGMA OF ORDER" to add comments!