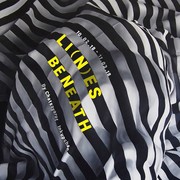 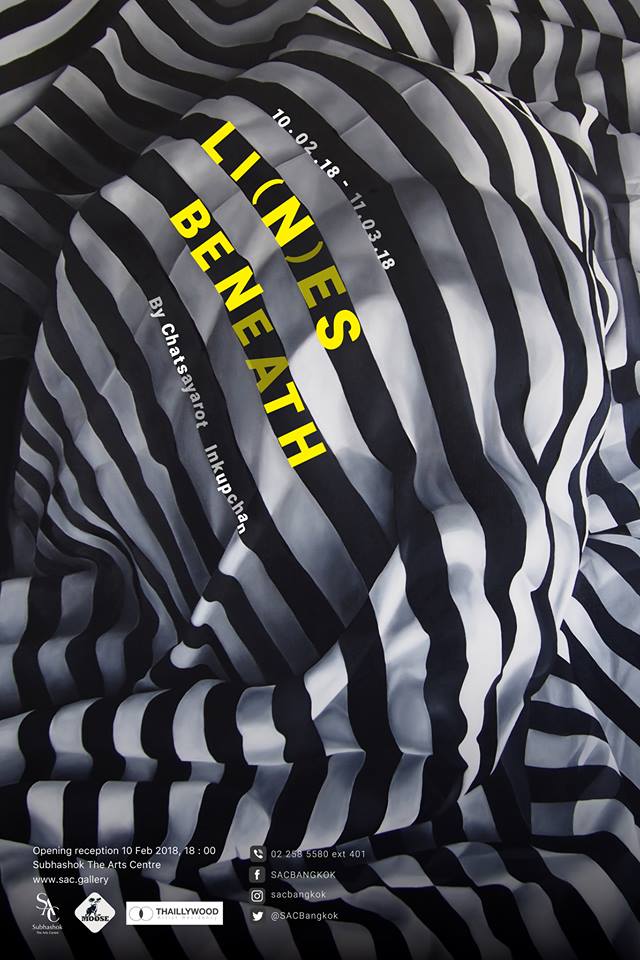 There is an English idiom ‘What lies beneath’ that means there is something situated under the surface or inside the exterior; then, we cannot see it clearly from the outside or the top layer. It also indicates some states which the appearance deceives or distracts you to realize the entire circumstances because the under is covered up or the inner part is hidden on purpose. Perhaps, the hidden is a sorrow and suffering. In addition, it is sometimes extended with words to respond to a specific context, e.g. ‘What lies beneath the surface?’, ‘What lies beneath the smiling face?’, etc.

The implication of LI(N)ES BENEATH, a solo exhibition by Chatsayarot Inkupchan, intended to play between the definition of the word ‘Lies’ that means deceive, conceal or place, put; and the word ‘Lines’ which related to her visual forms as she employs ‘Optical Art’, a style of painting that uses lines as a main visual element for creating artworks. Also, the word ‘Lies’ corresponds with her concept as to portray the delusion of humans’ emotions and the concealment of individual’s sentiments.

“By using fabrics to cover up tautly around a person’s face, it can be used as a figma archetype for creating a new series of oil paintings and a representation implying to the internal states of mind and individual’s feelings which sometimes we cannot perceive with bare eyes. The beginning of this series started from the state of my mind when I was stress out caused by situations and surroundings where we could not escape. Nevertheless, we needed to confront them and conceal the actual feelings although they are so tense.”
Artist: CHATSAYAROT INKUPCHAN

LI(N)ES BENEATH is Chatsayarot Inkupchan’s first solo exhibition. Inkupchan is a young Thai female artist graduated from Naresuan University, Phitsanulok. Her works have been explicated from her interests since the final thesis.
The exhibition LI(N)ES BENEATH presents a new series of paintings by Chatsayarot Inkupchan whose concept and skills were developed throughout her attendance in Thaillywood Artist Residency in 2017. The show will be displayed during 10 Feb – 11 Mar 2018. You are cordially invited to join the opening reception on 10 February 2018, 7:30 PM at S.A.C. Subhashok The Arts Centre, Sukhumvit 39, Bangkok. For more information, please contact: email manager@sac.gallery or tel. +66 2 662 0299, +662 258 5580 ext. 401.