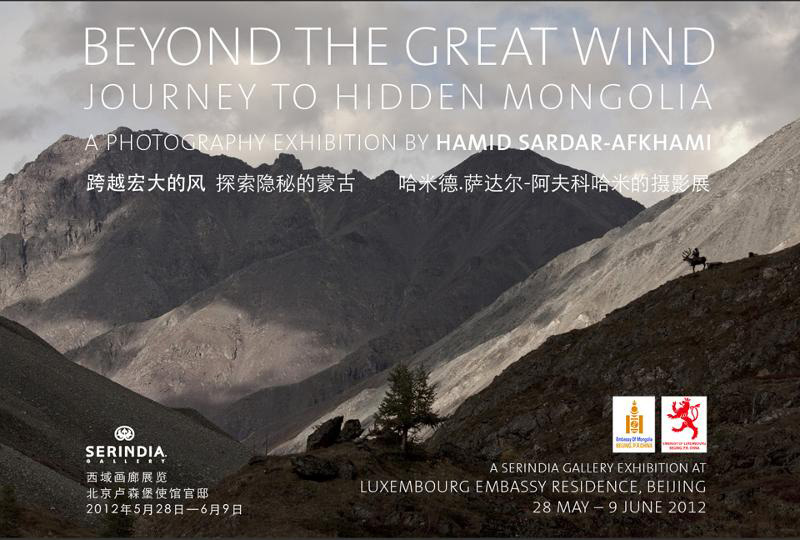 A SPECIAL EXHIBITION IN BEIJING: In association with the Embassy of Luxembourg and the Embassy of Mongolia, both in Beijing, China, Serindia Gallery presents a special exhibition of photographs of Mongolia by Hamid Sardar-Afkhami at a historic venue: the Luxembourg Embassy Residence, Beijing. The Luxembourg Embassy Residence was built in 1937 for a Missionary head in Anglo-Chinese style with a beautiful courtyard garden. In the 1970s it became the embassy residence of Pakistan, having received many important guests before and during the historic 1972 visit of Richard Nixon to China.

About JOURNEY TO HIDDEN MONGOLIA:

In ancient times, a terrible wind blew across the vast steppe connecting Europe to the Far East. The Greek poets called it the Boreal, and believed it lived in a cave somewhere in the Altai Mountains. Beyond the greatwind - in the country of Hyperborea - there was to be found a perfect land where the sun always shines; a place known for its priests and healers like Abaris; who lived in a place where according to the poet Pindar, “…neither disease nor bitter old age is mixed,” and where the Hyerborean race live, “in their sacred blood; far from labor and battle...” (Pindar, Tenth Pythian Ode)

The nomadic communities that survive in places like Mongolia today are the descendants of the legendary Hyperboreans; the enlightened race that lived beyond the great wind. Mongol nomads still preserve a vision of life which we in Western imagination still associate with the Golden Race. Perpetual movement on the open range and the proximity to animals, both domestic and in the wild, seems to impart on their kind a certain immunity from degeneration - a certain spiritual wisdom, which may appear incompatible, even abhorrent to thevalues of sedentary civilization, and which today remains a heroic anachronism, alien to our notions of time and history.

In these ethnographic dreamscapes inhabited by reindeer, bear, horses, eagles and wolves, humans no longer occupy the center of the image. They are just one element floating across the scene. In fact, without the animal companion life would not be possible and man would appear lost. The ecological mysticism binding animal and man is the essence of hidden Mongolia; it is a place that is bound up with talking beasts and the voices of ancestors, a place that awakens a sense of healing and well-being, yet something utterly contrary to the laws of civilized men. These iconic compositions harken to an earlier phase of human consciousness, to a time where spirit-animals escorted man across both physical and metaphysical barriers into other worlds.

Hamid Sardar-Afkhami is a photographer and award-winning documentary filmmaker. He received his a PhD from Harvard University specializing in Mongolia.

RSVP for นิทรรศการ "JOURNEY TO HIDDEN MONGOLIA" to add comments!