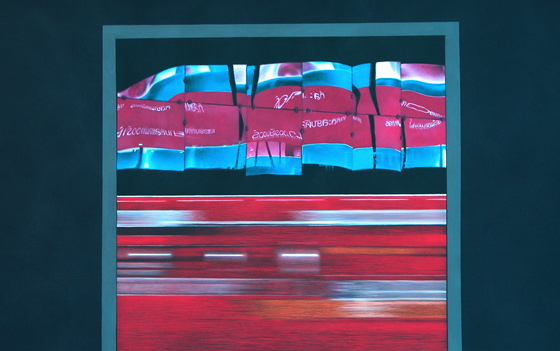 For his fourth solo exhibition 36-year-old Thai artist, Sarawut Ngernpum, a graduate of Silapakorn University (MFA Painting), presents 7 semi-abstract nightscapes of the Bangkok Mass Transit System. Interpreting urbanization and its effect on humanity, Sarawut’s new series reiterates the notion of coexistence between living spaces and voids within an urban setting with heavy reliance on light and shadow.
Large canvases covered in black convey the cold spaces that subsist under overhangs and next to large buildings, generating an impersonal atmosphere that seems to define the modern-day city.? But everywhere are pockets of white, yellow, red, and blue light of the Sky Train that cuts through the black like a beacon of hope. These powerfully composed black abstractions exemplify the negative and positive aspects of urbanization.?
S