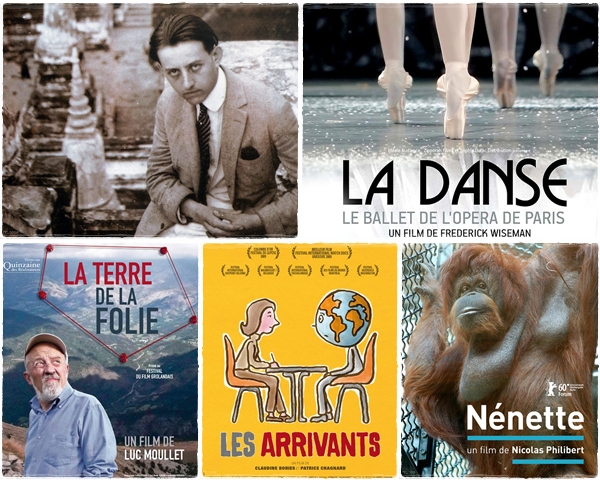 Alliance Francaise de Bangkok will present the 12th Annual Documentary Film Month showcasing 5 exceptional French documentaries throughout November 2011. The documentary films will be screened every Wednesday scheduled at 19:30 hrs in the auditorium. Admission is free.

“Portrait” is the theme of this 12th annual documentary film festival with a kick-off of La terre de la folie, a documentary on the behavior of the inhabitants of the Southern Alps region; La Danse, le ballet de l'Opera de Paris, a film follows the production of seven ballets by the Paris Opera Ballet; Nenette, a film of 40-year-old orangutan star of the Jardin des Plantes in Paris zoo; Malraux – Asie, the portrait of André Malraux ,the first Ministry of Culture’s Minister, and  Les arrivants, the emotional film on asylum seekers in France.

The Documentary Film Month is an annual cultural event with the goal to promote documentary films produced in France by screening some of the best documentaries on the big screen.

"The great-great-nephew of the great-grandfather of my great-great-grandmother one day killed the village mayor, his wife, and the village policeman with an axe - guilty, as far as he was concerned, of having moved his goat ten meters. This gave me a good starting point. There were also other manifestations of a similar sort in the family."
From a family in the Southern Alps, Luc Mollet, with his imperturbable seriousness and off-hand humor, studies the causes and consequences of these local psychic phenomena.

Frederick Wiseman, documentarian pioneer, set up his camera and let it roll for nine weeks within the heart of the Op?ra de Paris ballet.
From the costume department workshop to the performances where the prima ballerina and premier danseur shine, La Danse leads us behind the scenes of the prestigious institution and allows us to see the work of all those who contribute to creating the Op?ra's exceptional stage shows.

Born in 1969 in the forests of Borneo, Nenette recently turned forty. It is very rare that an orang-utang reaches such an age. An inhabitant of the zoo at the Jardin des Plantes in Paris since 1972, she is now older than any member of the staff working there. The undisputed star of the place, each day she sees hundreds of visitors pass by in front of her cage. Naturally, everyone has their own special comment to make.

Caroline is young, impulsive, quick-tempered. Colette, a little older, is compassionate and disorganized. Families that have come from Sri Lanka, Mongolia, Eritrea, and elsewhere face both women when seeking exile in France. Each day more people arrive, with or without passports, with or without luggage, by the planeload or in tarpaulin covered trucks... How do we cope with this overflowing tide of distress and need? The film recounts this face to face encounter, at times tense and explosive, moving and amusing, where everyone defends their position.