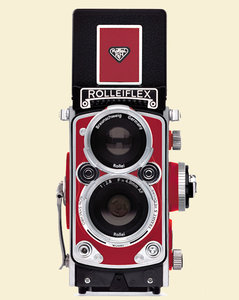 Many people may think of Rolleiflex professional cameras as classic if somewhat clunky affairs. Those people may want to start reevaluating that view, however, now that Rolleiflex has once again released a super cool miniature digital version of its twin reflex camera. Once again, we have to say that this mini Rollei is cute as hell. (Whoa, can't believe we just said that.)

The Rolleiflex MiniDigi AF 5.0 is just three inches tall but it includes some fairly decent digital features, making this tiny camera more than just a novelty. Though it may look like the original MiniDigi released back in 2006, the AF 5.0 model includes several improvements including autofocus (between 10CM and infinity); 5MP interpolated image files, and a 1.1-inch screen on top of the camera for reviewing your shots.

The coolest part though is how much is resembles a shrunken version of an original Rolleiflex which used two lenses, one above the other, a hand crank lever, shutter release, and hooded viewfinder. The crank lever on the new MiniDigi prepares you for your next shot – rather than advancing the film – while the classic pop-up hood and viewfinder lets you do some traditional-style "waist-level" shooting and prevents stray light from getting in. Another interesting throwback is that the MiniDigi AF 5.0 shoots digital files in a square format just like in the old days.

Along with being small enough to fit in the palm of your hand, the Rolleiflex MiniDigi AF 5.0 offers one distinct difference from the classic coal-black model –it comes in fire engine red. Oh how very racy it is!

Comment by pandit on August 24, 2009 at 12:59pm
ถ้าถ่ายแล้วได้สีแบบ Rollie จะเลิศมาก