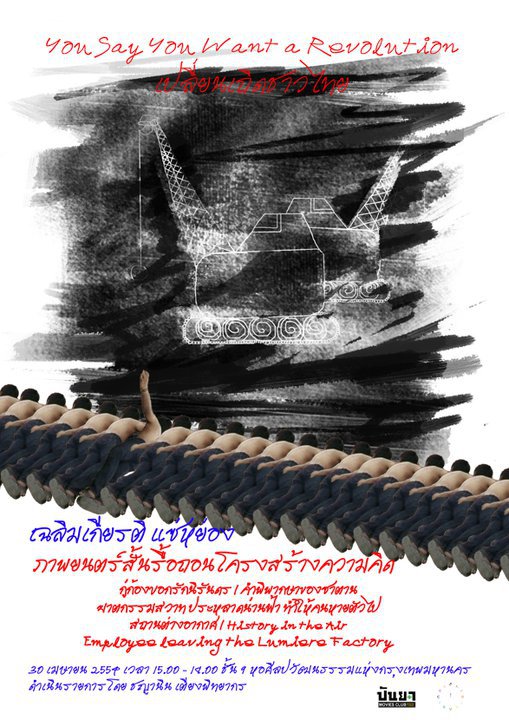 The retrospective of Chaloemkiat Saeyong, who is one of my most favorite directors of all time, will be held this Saturday on the 9th floor of BACC at 1500-1800 hrs. The details of the event can be found here:
http://www.facebook.com/event.php?eid=194731583900668

The event is organized by Bodin Theparat. The poster is designed by Nattaphan Boonlert.

This is what Ratchapoom Boonbunchachoke wrote about Chaloemkiat's films:" Chaloemkiat's films are structured like a vast, dazzling labyrinth in which being lost is considered less like a loss than a reward, the complex yet never tiring one to wander into. Challenging experiment inducing pleasure deserves to be seen and enjoyed. A must for the adventurous!"

This is what I wrote about Chaloemkiat in INDIAN AUTEUR:http://www.indianauteur.com/?p=976" Chaloemkiat Saeyong’s masterpiece is Politically Lawyer and Narrative Cinema (2009, 27 min), which plays with many elements of cinema. The film tells a fictional story about a murder in an airport and uses this murder to remind the viewers of the real case of Somchai Neelaphaijit, a Thai political lawyer who disappeared in 2004. Wiwat Lertwiwatwongsa, a Thai film critic, makes an interesting observation that the film seems to both tell a story and destroy its story at the same time. The film is extremely self-reflexive and has numerous weird things in it. For example, both the English title and the Thai title of this film are “intentionally” grammatically wrong. The film shows us a lecture room or a corridor in a building, while a text appearing on the screen says that the audience must imagine that what they see is an airport. The film reminds me of some weird and wonderful films by Jean-Luc Godard. Chaloemkiat also made Peru Time (2008, 18 min), which lets us watch a sunset for 18 minutes while some unreadable texts keep appearing on the screen. Wiwat compares this film to the opening scene of India Song (1974, Marguerite Duras). Chaloemkiat also made A Place of Different Air (2008, 24 min), in which the images appearing on the screen change their sizes from time to time. This semi-documentary, semi-experimental film is about a family who has just moved to a new place, and the different image sizes seem to emphasize the contrast between the old place and the new place."

RSVP for ภาพยนตร์สั้น "เปลี่ยนเถิดชาวไทย" (You Say You Want a Revolution) to add comments!