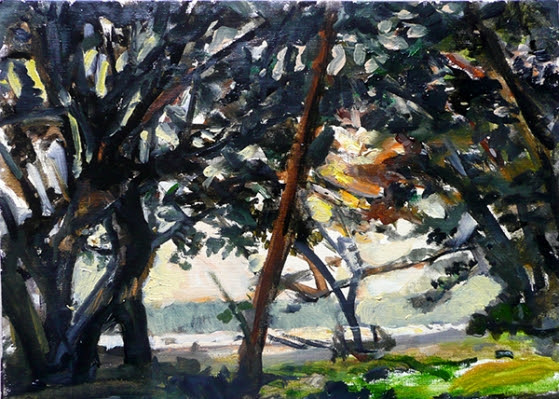 Works by resident artist from Mexico

Fernando Aceves Humana is established as an independent artist in Oaxaca, Mexico. His lithographs, etchings, oil and watercolor paintings are famous for their flamboyant colors and their crude, engaged, realistic yet surreal subjects.

Since 2008 Fernando has spent several months every year traveling and working in South East Asia. He and his artists’ collective ‘Tequio: La buena imprecion’ have generously set up an etching and lithograph studio in 2013 for the art school of Phnom Pen (Cambodia) where they trained local teachers, giving an opportunity for hundreds of students to explore printing techniques. Fernando also worked in collaboration with several Khmer artists amongst them Sopheap Pich and Vann Nath to create a limited edition portfolio to finance the print studio.

Fernando is considered a "nomadic" painter; always traveling with his "portable studio", he excels at the art of live painting, capturing like no other atmospheres, moods, people, gestures, colors and lights. His outdoor produced works, in between sketches and finished paintings, have a raw and direct quality, which lets the viewer fully appreciate the bare technique and layers of rich oil paint.

Wounded Eden is a broad selection of live sketches and portraits as well as studio works produced at Toot Yung, painted in Thailand and Cambodia from November 2013 to February 2014. For this set, Fernando focused on natural paradises, which are on the edge of disappearing in the coming months. For instance he painted scenes in the surroundings of Ream, Sihanoukville in Cambodia, which will soon be developed to be highly touristic locations. He also spent time in the Golden Island (Churoy Changvar), where the Tonle Sap and Mekong River meet. Natural garden with a very specific fauna and flora, the Golden Island is now being ceiled with cement to construct high buildings. The floating villages of the Cham minority are being destroyed and its people expelled from their ancestral habitat. In Bangkok, the artist worked on pieces related to ancestral Mexican beliefs linking humans, nature and death, as well as Bangkok wastelands covered by opulent jungle, soon to be constructed.

During his residence at Toot Yung (18 Jan-20 Feb 2014) Fernando Aceves Humana will also be setting up an etching studio on the second floor of the Art Centre, which will be open for professional artists and public workshops starting February 2014. To inaugurate the studio, a group of local artists will be selected to work in collaboration with Fernando to produce a limited edition portfolio of prints.