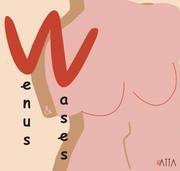 Venus has long been associated with beauty, perfection and female quality in Greek and Roman cultures. And in the modern-day, women are even said to have come from Venus according to a book “Men are from Mars, Women are from Venus” by John Gray!

The vase has been known as a maternal symbol among other things. Vases were used as metaphors for women in Dima Ghawi’s Ted Talk on May 15, 2014. In her talk, a “blemished” woman was referred to as a “cracked” vase...no longer desirable...no longer valuable…in her middle eastern culture.

Venus & Vases is a conversation about women…from women’s perspectives regarding the expectations and limitations placed on them as well as how they try to break away and find their own voices in today’s society. The conversations between artworks by female artists from different disciplines and cultures, in various media and forms point out the common threads that run through our society regarding women’s “rights” and “freedom”.

With Venus & Vases, we would like to pay homage to the brave named and unnamed women who are working hard to better their own lives as well as other women’s lives and to fight for gender equality in today’s society across the world…and for many generations to come.

Venus & Vases will be opened on the 7th of March in order to celebrate the International Women’s Day which is annually held on the 8th of March.