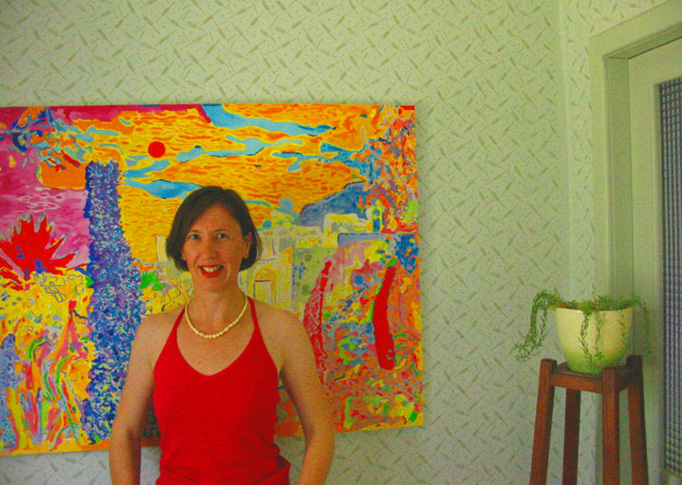 The artistic compositions created by Tjasa Iris are inspired by gardens.

Last Spring, the artist spent two months in the northern city of Chaing Mai, where the Bhubing Palce Gardens proved to be her greatest inspiration. The works featured in this exhibition are dedicated to the theme of gardens and feature examples of the vivid flora the artist captured during her stay in the north of the country.

Tjasa Iris has a multicultural background. Born in Slovenia, the artist was educated in Italy, the UK, and the Netherlands. She earned her M.A. in Painting in 1995 from Academie Minerva in Groningen, the Netherlands. She lived and worked in Venice, Paris, California and Slovenia before traveling to Southeast Asia to make art in the region. The artist's work has been exhibited in commercial galleries and state museums across Europe over the past 16 years.

In February, 2010, the artist's work was presented by Instinc Gallery in Singapore, after she spent one month there as an artist in residency. In October, 2010, she was identified as a 'New Find' at the Art Singapore 2010 exhibition. In November of the same year, the artist's paintings were presented at the AAF Art Fair Singapore 2010.

The artist has recently worked in Bali, where she exhibited at Wina Gallery in Ubud. The paintings then traveled to Kuala Lumpur (KL), where they were exhibited at UCSI University in March 2011 for the International Women's Day. Examples of the artist's work are also currently on show at 116 Art Gallery in Chiang Mai (through 12 February).