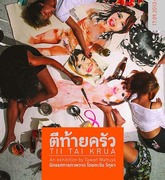 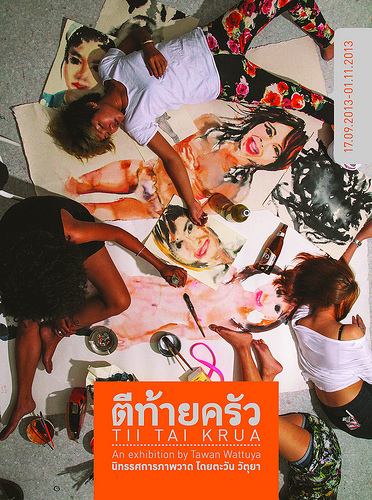 At The Art Center, Office of Academic Resources, Chulalongkorn University

September 16 – October 8: Opening of Studio for Models Only

Well known for his unique approach to watercolor and his thought-provoking subject matters, Tawan Wattuya is widely considered one of today’s most important Thai painters. Coping with subjects such as politics, sexuality, identity, he achieved to hustle Thai societies’ most exuberant taboos. During his career Wattuya produced very few portraits from live models; he usually works from reproductions of found imageries through internet and old and new magazines. For the first time “live model painting” will be the center of his latest project, Tii Tai Krua.

After painting gatherings of all sorts, beauty contestants, teenager gangs, boy and girl scouts, students, football teams, it came only naturally that Tawan’s attention was drawn to the social group directly evolving around him, the actors of contemporary art in Thailand. Inspired by a long time tradition of family portraits throughout art history, Wattuya will compose a gigantic piece representing the local art community. In the line of Navin’s SUPER(M)ART Bangkok Survivors (2004) which depicted famous artists and curators in a crowded Paolo Veronese-style setting, Wattuya will produce a very large scale watercolor of Bangkok’s contemporary art scene actors, assuredly spiced with humorous critique. By using a classical medium and subject the artist challenges the traditional art historical representations of group portraits; Royal court family portraits, religious group representations of the sacred family and saints.

The Tii Tai Krua project will consist of two stages. The first stage will be only open to invited models and on request (Sept 16 – Oct 8). During this time, the gallery will be revamped as Wattuya’s studio shifting the terms of a gallery show and expanding the potential for social interaction with the artist. This phase dissolves the tenuous boundaries between viewer and participant, inviting the audience to interact, engage and enjoy with the artist. The second phase will be open to the public (Oct 10 – Nov 1) showcasing the produced piece in the untouched setting of the studio. All happenings within the studio space will be recorded in a time lapse and shown during the public exhibition.

The exhibition’s title, “Tii Tai Krua,” is a popular Thai saying meaning “to make friends with the wife or family of a party for the purpose of personal gain.” This title was chosen to enhance, with humor, the ambiguity of the relationship between artists, curators, collectors, and politicians involved in the art world.