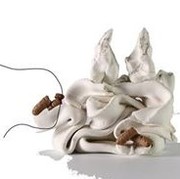 100 Tonson Gallery is pleased to announce There are More Monsoon Songs Elsewhere by Dusadee Pang Huntrakul. The exhibition features works on paper, found photographs and special installation by the artist in collaboration with Naroot Pitisongswat of Flo Furniture.

“There are More Monsoon Songs Elsewhere” (2018) is a series of hyper-real drawings of prehistoric Ban Chiang bracelets that dated back ± 3,000 years ago. The original bracelets are now in the collection of LACMA (Los Angeles County Museum of Art) in Los Angeles. These prehistoric Ban Chiang artifacts were accidentally found by an American student who were researching for his senior thesis during the summer of 1966 in the northeastern part of Thailand. This discovery was considered to be a major breakthrough in Southeast Asian archeology as it predicated Southeast Asian as an autonomous Bronze Age that weren’t owed its metallurgy advancement from its neighbouring countries like India and China. Even though the artifacts has been surfaced before but it was brought to attention by the help of the United States government which led to major archeological excavations of the site and further studies, however this could be seen as a Post Vietnam by-product of US imperialism as well as to serve their geopolitical agenda of replacing Indochina governments with liberal democracies to win against the influence of communism.

Along with the drawings of Ban Chiang bracelets and bangles, Dusadee also presents a series of photographs “Artifacts” (2007) of which he accidentally found in a drawer of an old cabinet in a thrift store on Wilshire Boulevard in Los Angeles. The photographs depict women leisurely laid on the beach in their bikinis captured by then periodic gaze of technology and its bearer. While the identity of these women remained unclear but together with the prehistoric bracelets, evoke the sense of its wearer and perhaps mirroring simultaneously a parallel egalitarian lives with leisure- laced capitalism of both ancient and recent where they can all be envisioned as skilled hunter- gatherers, taxpayers, and both actively participated.

In this exhibition Dusadee also present his new ceramic pieces with sculpture installation designed by Naroot Pitisongswat of Flo Furniture. Dusadee came across Flo’s famous design “Dinsor (pencil)” which structurally composed of hexagon wood profiles that resembles pencils, a tool used for drawing, something fundamentally accessible and protean. As a cross-over between designed object and sculpture, Niroot offers visions of living and theatric of lives both inside and outside. When as Dusadee’s ceramic works, as the artist stated “I make objects to remember the lives of those around me and clay has potential to open up how becoming addresses its materiality, economy, technology of the making. With hand built figurines, I want to suggest that information and empathy can be realised through represented touch”

RSVP for นิทรรศการ "There are More Monsoon Songs Elsewhere" to add comments!