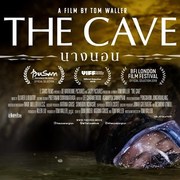 “The Cave” is the first narrative feature film about the dramatic rescue of 12 boys stuck in a cave at Tham Luang in northern Thailand which captivated the world last year. The feature-length film will have its world premiere at the Busan International Film Festival in South Korea on Oct. 5 2019 and a general release in Thailand on Nov. 28.

The film, written and directed by Tom Waller, follows the story of unsung heroes and the volunteer spirit of the rescue mission, including the illuminating perspective of Belgian cave rescue diver Jim Warny, who dropped everything to go and help the 12 boys and their coach who were trapped in the flooded cave. Jim also reprised his role in the rescue, playing himself in the film – and will join the panel on this evening.

In an illustrated talk with clips from the film, the panel will discuss aspects of the filmmaking process, and the arduous task of getting permission to make the film with the relevant Thai authorities.

The discussion will be followed by a Q&A session for press and members interested in posing questions to Jim and some of the filmmaking team.

Please note the early start. The session will finish at 7.30pm sharp.

SPEAKERS:
-Tom Waller – writer/director/producer of THE CAVE, has been living and working in Thailand since 2003 and has produced more than a dozen movies, many for Hollywood. He runs one of Thailand’s leading film production service companies, De Warrenne Pictures. His previous films as director include MINDFULNESS AND MURDER (2011), which was nominated for five Thai National Film Awards and THE LAST EXECUTIONER (2014), which won the “Tukkata Tong” or Golden Doll Award for Best Picture in Thailand.

-Jim Warny, lead cast, has been diving in caves for over 20 years. An electrician by trade, he was born in Belgium but is now based in Ireland.