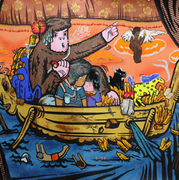 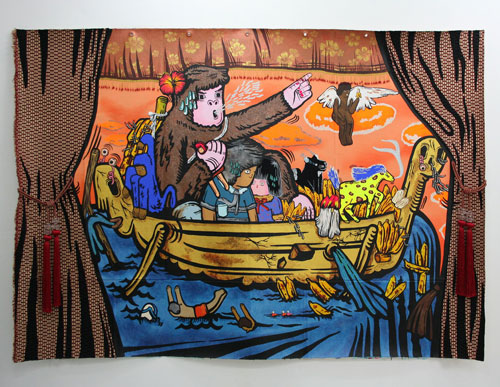 To welcome the year of the Rabbit 2011, 100 Tonson Gallery proudly presents Yuree Kensaku’s brand new solo show “Shortcut to Melancholy Hill”. She is an outstanding and distinguished young Japanese-Thai artist. This time, we are presenting her solo show in town with her signature quirkiness on paintings by the use of vivid colors, often employed to create a hidden message. She always collects and records what she feels, sees, and experiences by blending her imagination to her works.
This exhibition will tell us about the changing surroundings and also politic liberty which led everything to violence and depression. It seems that we cannot find the feeling of security in anywhere. The artist would like to discover a best shortcut for escapade, but it’s rarely hard to find.
In 2010, Yuree has launched various works by participation with local and international activities such as Big Mountain music festival 2010, “For” wall painting exhibition at Bangkok Art and Culture Center, Bangkok, Thailand and the special illustration for music video of a song titled Pleng Pry by Pry & May-T Project (collaboration with Thai animator Yongvit Santanaphanich). Moreover, Yuree has also shown her large paintings as one of the selected 10 participants in Kuandu Biennale 2010, Taipei, Taiwan.
Artist’s profile : Yuree Kensaku
Born in 1979 in Bangkok, After graduating from the Department of Visual Arts in Bangkok University in 2002, her works were presented in several solo and group exhibitions including the 2003 Brand New at the Art Gallery, Bangkok University, Bangkok, 108 Paths to Vanity in 2004 at 100 Tonson Gallery, Bangkok, One On Other, a workshop and exhibition at About Studio/ About Cafe, Bangkok, in 2005, and created big murals in “FOR” Wall Painting Showcase by groups of Thai graphic designers and artists at Bangkok Art and Culture Center, Bangkok, Thailand in 2010, and In 2007 Kensaku has presented her solo exhibition Love in platinum Frame at the Art Center, Chulalongkorn University, Bangkok, Thailand, as well as being an artist in residency and held solo show The Adventure of Momotaro Girl at the Yokohama Museum of Art, Yokohama, Japan. Kensaku is due to hold another solo show, titled Same Place While The Clock’s Hands Pace, exhibiting brand new works at Gallery Ver, an artist run space, in Bangkok Thailand after a curatorial request by Rirkrit Tiravanija. In 2009, Yuree has held 3 solo exhibitions locally and internationally, Bejing China, Taipei Taiwan, and Bangkok, Thailand. Yuree is one of selected 10 artists participates in Kuandu Biennale 2010, Taipei, Taiwan.
Exhibition Period: 3 February – 12 March 2011 ( every Thursday – Sunday)