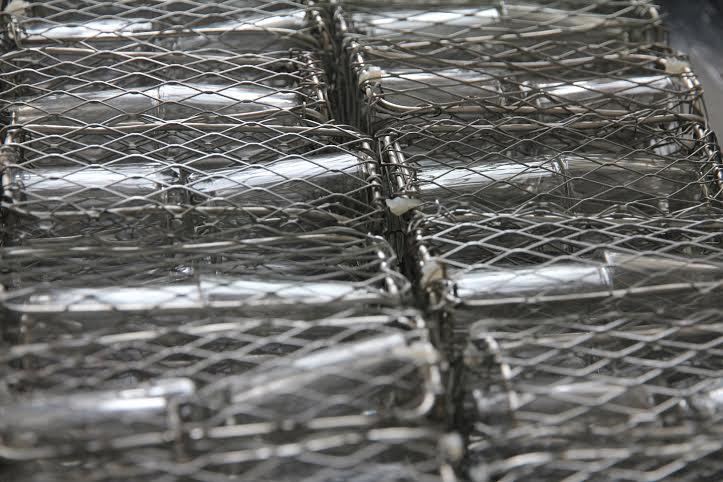 H Gallery Chiang Mai is very pleased to announce a site-specific installation by one of Thailand’s leading sculptors. SHATTER builds on Jedsada’s practice of carefully studying the material components of a site as the basis for installations or interventions that possess a pronounced architectural quality. Jedsada re-figures the audience’s relationship to a place by seamlessly altering functional and metaphorical expectations.

For SHATTER, Jedsada was inspired by the repetitive and gridded brickwork of the exterior and interior of the gallery and has replicated the scale of the bricks with wired blocks that wrap fragile containers. These blocks form a new floor for the gallery on which visitors are invited to tread. SHATTER demands careful movement throughout the altered gallery, as we risk breaking the fragile elements while our steps create a rhythmic sound.

Heightening our sense of being in a place, and introducing an extended experience of architecture and space, SHATTER highlights the symbolic dimensions of physical movement and draws out an array of artistic and extra-artistic associations.

Jedsada Tangtrakulwong (b. 1972) is based between Maha Sarakham, in the northeast of Thailand, and Bangkok. A graduate of Slade School of Fine Art, London, his solo exhibitions include Downfall (2013) at Bangkok University Gallery, Twist (2011) at H Project Space, Bangkok. Recent group exhibitions include Nave 13 (2013) at Espacio de Creación Contemporánea, Cádiz, Spain, 12th Silpa Bhirasri Creativity Grants (2013) at The Silpakorn University Art Gallery, Riverscapes IN FLUX (2013) at Metropolitan Museum of Manila, Philippines and The Hua Krathi Project (2013) at School of Art Gallery, RMIT University,
Melbourne.