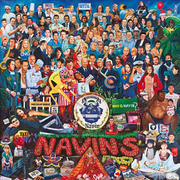 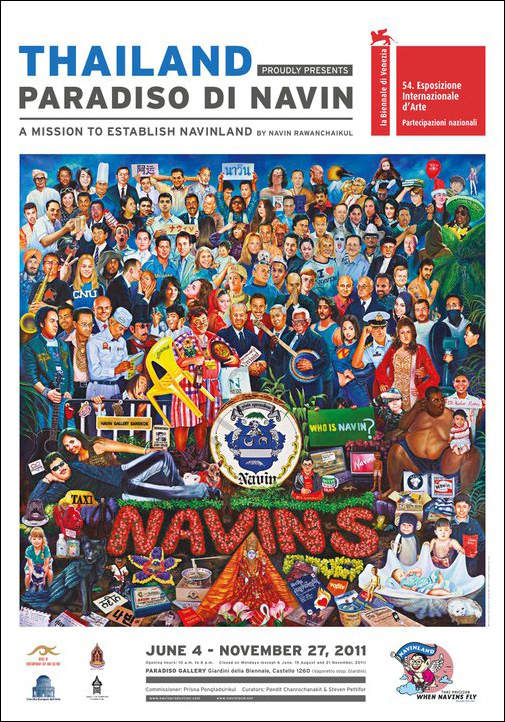 Marking Thailand’s fifth occasion at La Biennale di Venezia, the Thai Ministry of Culture’s Office of Contemporary Art and Culture (OCAC) has taken the initiative of inviting artist Navin Rawanchaikul to establish the para-pavilion of Paradiso di Navin as the inaugural convening point to endorse global

recognition for Navinland. In what is Thailand’s most ambitious national presentation to date, the Navinland Pavilion is site-responsive to the historic and entertaining locale of the Paradiso along the Giardini’s splendid waterfront.

Conscious to both the exhibition’s theme of ILLUMInations and Thailand’s ongoing fractious political landscape, Navinland is a multifaceted situational environment that challenges perceptions of identity and nationhood, through the trajectory of a borderless community. An extension of the Navin Party, a previously established network to connect Navins of the world, Navinland acknowledges the historical framework of kingdoms, republics, unions, micronations, and transnations, while extricating itself from geographic, theological or ideological containment.

At Paradiso di Navin, the public is asked to consider and register support for the fledgling non- nation of Navinland. At the transit area for the burgeoning collective of Navins and friends of Navin, Chairman Navin satirically subverts utopian idealism in extant art agendas.

At Paradiso di Navin, the artist collaborates with Jim Thompson, to style the Paradiso restaurant and bar with indigenous Pha Khao Mar textile motifs. A leading Thai brand of fine fabrics and a dedicated promoter of art from Thailand, Jim Thompson also teams up with Rawanchaikul to produce associated memorabilia toward the greater recognition of Navinland.

Pandit Chanrochanakit is a lecturer at the Faculty of Political Science, Ramkhamhaeng University. He holds the position of Deputy Dean for Policy and Planning. Chanrochanakit received a BA in Economics (1992), an MA in Political Science (1998) from Thammasat University in Bangkok, and a doctoral degree from the University of Hawaii at Mãnoa (2006). He has been a collaborative consultant to Navin Rawanchaikul on numerous art projects since 1997. He is the editor of Vibhasa magazine, which has published articles on the social sciences, humanities, arts and culture