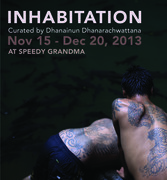 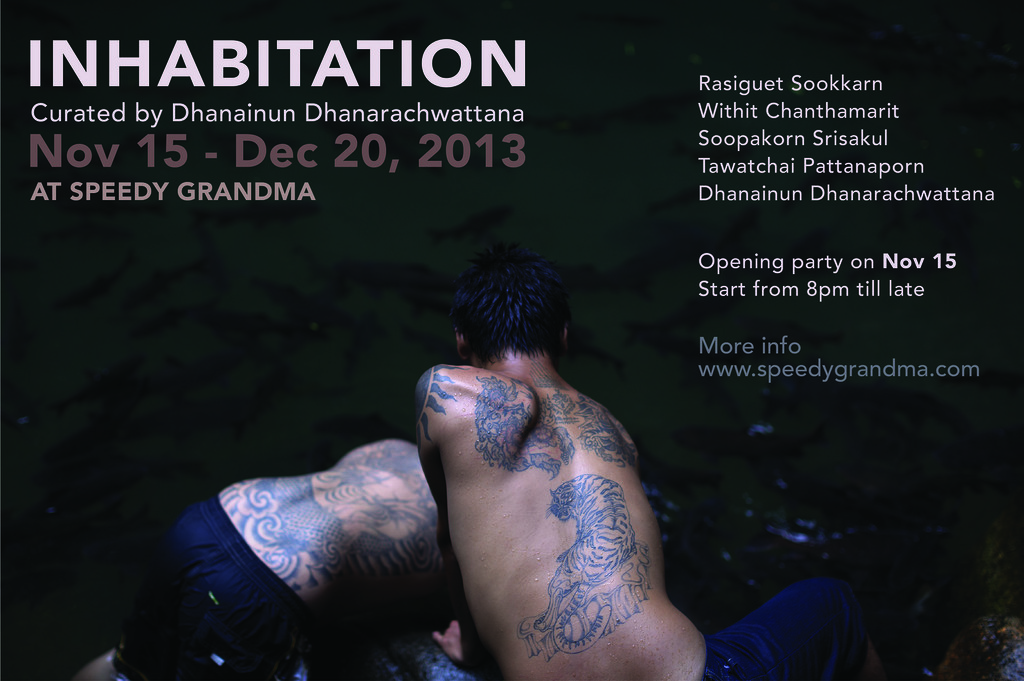 A group Exhibition by:

INHABITATION is a photographic exploration into the act of living, of the self in relation to its surrounding, andof claiming that surrounding for oneself. It is the personal relationship with the places that one finds oneself in. This private interaction between oneself and one’s environment transforms the static and objective locus of things into a personal and subjective dynamism of space, or as the French scholar Michel de Certeau succinctly put it, ‘space is a practiced place.’ This private and personal space can manifest itself through many means, and in many different ways depending on its constitutions; that of the act and the place. In other word, through the act of inhabitation a rigid place is transformed into an active space.

INHABITATION is presented through the lenses of Rasiguet Sookkarn, Withit Chanthamarit, Soopakorn Srisakul, Tawatchai Pattanaporn, and Dhanainun Dhanarachwattana. They are Thailand’s new wave of photographers whose lives are deeply intertwined into the enterprise of photography. Theirs is a life of photographic explorations; from being professional and editorial photographers to cinematographer to being a writer on all things photographic. These differing perspectives on photography give each photographer a different take on how they utilize the medium and its inherent aesthetic while committing to the same common theme; a photographic narrative of their respective lives and spaces.

From the intimate and secretive corner of personal lives to private experience of the public world, INHABITATION investigates and celebrates this diversity of the process of transformation that turns any given place into an infinite version of spaces. If it is true that one cannot understand life and live life simultaneously, then life photographed may be the closest one could ever come to bridging that gap between the physical act of living and the mental act of understanding. The photographs presented in INHABITATION aim to foster that bridge by providing the verisimilitude of the places that each photographer inhabited and photographed. The very act of pressing the shutter, however, turned these places into spaces. They are the photographs of the distilled understanding of lives lived through, or pieces of private spaces that ask the audiences to examine their inhabitation of the world, and that of their fellow inhabitants.