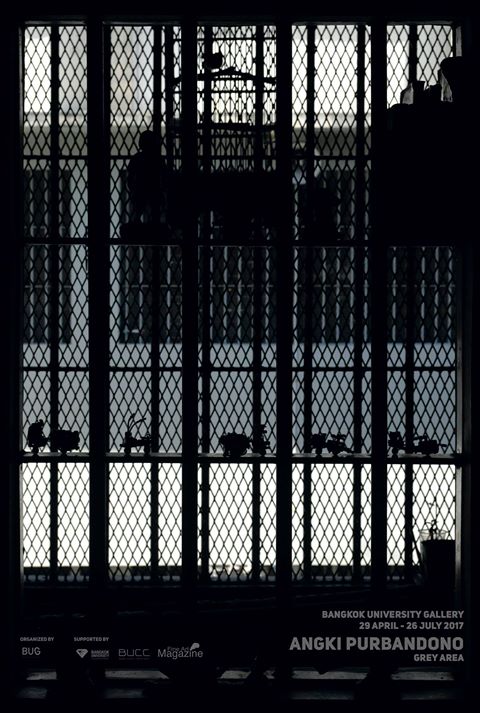 Angki Purbandono, a well-known photographer from Yogyakarta, Indonesia created some series of photographs during 2012-2013 while he was imprisoned. Instead of giving himself up, he turned to use that remarkable time producing interesting artworks that were based on community relation within the limits of space, place and equipment.

As a photographer, he discovered the way to create an image from scanner while camera is prohibited. Some parts of the artworks were co-produced with the warden and others prisonners. For 1 year and 3 months, he turned the controlled situations to opportunity of doing something impossible possible. As a result, Angki's works are full of the unexpected things like they come from different world.

Material Ethic
With the habit of looking at things surrounding me, I always believe that I can change and do something different. When I was in prison, I collected useless objects but to me they were important. Those small useless objects made me think of two big philosophies; beauty and flexibility.

Out of the Box
As the camera is not allowed in the prison, I have never expected that I could use camera there. Luckily, Mr. Yoga wanted to learn about camera in terms of technique and creativity. At the time of silhouette lesson, we learn from the decoration of the windows in the jail with the inside out perspective.

Sandal United
After my third sandals were lost in the prison, I decided to walk bare feet. Therefore, to signify the ownership, some may put their personal sign on sandals. However, in this situation, I found out that there are pride and unity of all inmates from those personal symbolized sandals.

Legalized Illegal
"It is about photo diary for Angki. He is worried about me. For me, I do a little, just click but it’s a big thing for Angki, big energy for him to hope that he is still with me. I think this is to support him. It is too much photos of me but it is a really good context and history for sharing." (Diane - His spouse)

This solo exhibition of Angki presents the potential of the contemporary art that can move on every restriction and also incredibly and humorously declare of its existance to society.