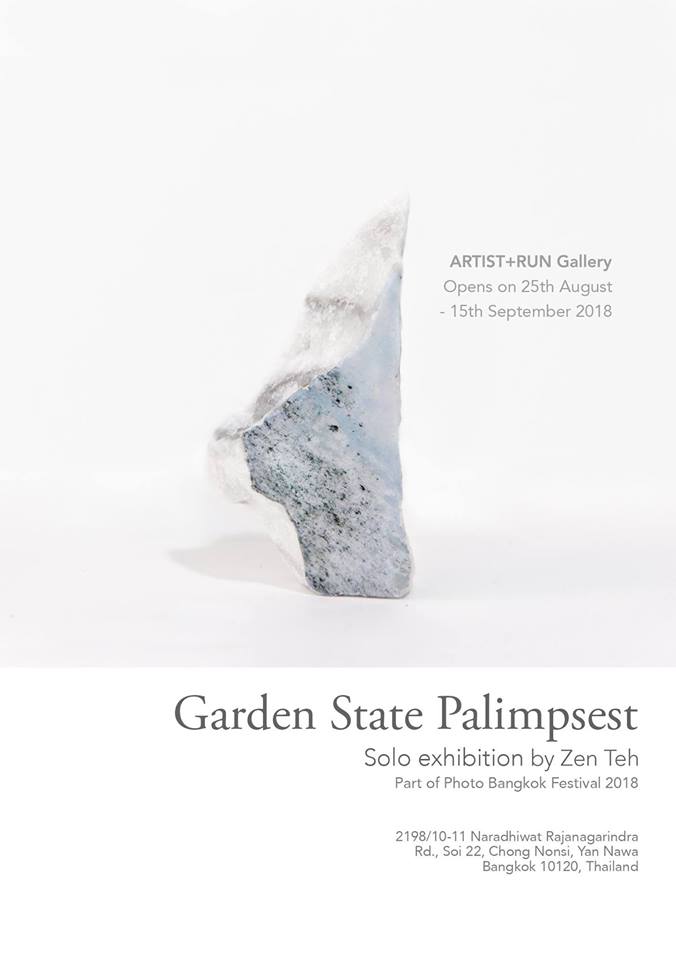 “As an environmental artist, Zen Teh has long been interested in issues related to urbanization and human interaction with the natural landscape. Her most recent project, Garden State Palimpsest, was first shown in her solo exhibition, 'Vestiges: Tracing Urban-nature', at Société Générale Gallery, Alliance Française de Singapour in September 2017. The exhibition took place after she won the France + Singapore Photographic Arts Awards (FSPAA) for her series, The Imperative Landscape (2014). Teh developed that body of work during a residency in the mountainous city of Chiang Rai, Thailand. In The Imperative Landscape, Teh transposed images of Chiang Rai’s natural environment onto geometric cutouts. Both series were on view at Alliance Française de Singapour. There is a cohesive visual trajectory from The Imperative Landscape to Garden State Palimpsest, though the latter series was created using an arduous hand transfer and image-layering technique, as compared to computer printing in The Imperative Landscape. Furthermore, Garden State Palimpsest draws poignant references from Singapore’s lost natural environment. Inspired by the perpetual changes to Singapore’s geography, Teh’s Garden State Palimpsest not only brings into focus the spaces that have vanished, but the memories associated with those places that will fade as well, if we let them.”

Text by Jean Wong (via: https://theartling.com/en/artzine/2018/01/08/reimagining-singapores-urban-landscape---artist-zen-teh--in-conversation-/)

Garden State Palimpsest explores the constantly changing landscape and its residents; relationship with the land. Informal rural settlements called kampong used to be home to a large number of Singapore’s population before the country underwent rapid urbanization in the postwar period. The artist carried out interviews with Singapore’s previous kampong dwellers that become a starting point to reconstruct memories as images. These imaginings of nature in their various modes of presentation—as sculptural photographic images, maps, and narratives—are complex layers of encounter that probes at ideals, nostalgia and desires with regards to our lived environments.

Biography
Zen Teh (born and live in Singapore, 1988) is an artist and educator interested in man's relationship with the natural world. Teh’s art practice is shaped by her proficiency in photography and painting, alongside her continual investigation into interdisciplinary studies of the works of nature and human behaviour. Her works has been showcased in numerous group and solo exhibitions in Singapore, including the National Museum of Singapore, Singapore Art Museum and Art Science Museum. She has also exhibited regionally in Thailand, Indonesia, Korea, Taiwan, Hong Kong and China and invited as a guest speaker at a regional environmental conference such as ASEAN Powershift 2015 and Hanoi Innovation Week 2016 on Sustainability. Teh has also been recently awarded the winning title for the 7 th France+Singapore Photographic Arts Award.