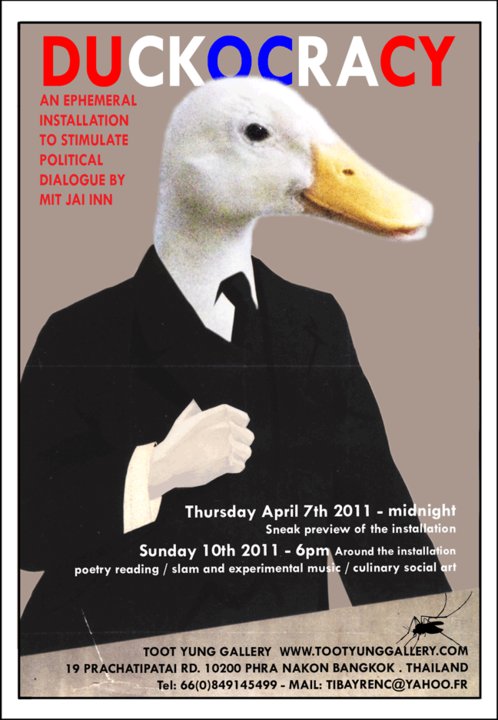 Implying a parallel between his humorous and satirical installation and Thailand’s political system, Mit Jai Inn aims to open the dialogue of the engagement of Thai artists towards the Thai political disorder and the construction of the society. Feeding and raising a large number of ducks for several weeks, Mit Jai Inn questioned himself about the present political system in Thailand. Following books by Conrad Lorenz, he noticed that ducks can be educated to almost anything; you just have to place the correct information in its brain at the right time of his life. His readings and observations led him to think that Thai people were treated as ducks by the power in place and hence, acted as ducks!  Inspired by the very influential book by George Orwell, The animal farm, Mit Jai Inn decided to build an allegorical installation reflecting Thailand’s society, people and power system.

Mit Jai Inn’s installation is not an end to itself but rather serves to unfold a more complex knot of concerns about how Thai people and especially artists engage themselves towards the current political situation in Thailand.  It is an invitation for all (and with different opinions on the actual political issues in Thailand) to gather and talk openly. This ephemeral installation will be the scene for poets, musicians and culinary artists to develop ideas for a better social and political system in Thailand.

RSVP for DUCKOCRACY by Mit Jai to add comments!