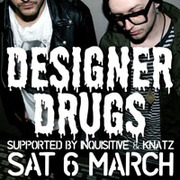 808 Is Proud to Present you a night of electro MAYHEM March 6th with
DESIGNER DRUGS from New York, and DJ INQUISITIVE from Butter Club Kuala Lampur. If you're a fan of Steve Aoki, Diplo dont miss out on this! Both guests will be joined by resident DJ KNATZ!


Michael Patrick, Designer Drugs’ DJ/Frontman, is booking shows worldwide and has DJ’d throughout North America, South America and Europe. With over 11 years experience and the ability to read and work any crowd, he continues to kill it on the dance floor. He teamed up with JHN RDN to create Philadelphia’s best monthly party; LIVE FOREVER. Designer Drugs is also working with New York party photographer ELLE REX of RUFF CLUB fame to capture the wild debauchery that takes place at Designer Drugs shows. You can find those pictures at www.ElleRex.net.


Both members of Designer Drugs pull from their classical music training to create club anthems with pop sensibilities; encouraging the listener to enjoy the music both in the club and in their living rooms. Slaves to the studio, they focus on high fidelity production and are constantly requested to write, record, remix, mix and master projects for other artists.