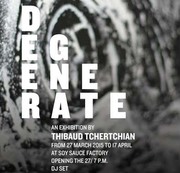 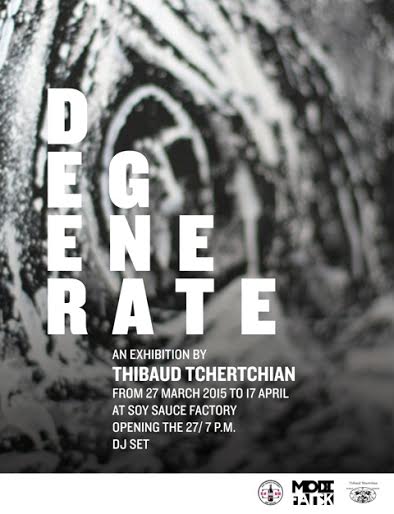 "Degenerate"
Solo Show by Thibaud Tchertchian
Opening Party: 27th of March from 7pm
With Dj Set
From 27th of March until 17th of April

For his new solo exhibition, Thibaud Tchertchian interpreted landscape into the expressionist topic. The pre-war movement is still alive for him which influents not only the American school but also the imagery of contemporary cinema especially horror movies. "Degenerate" is a continuation of his previous exhibition "blackwhite" and analyzes the mechanic of the controversy as an expression of personalities committed through classical subjects such as landscapes.

Thibaud Tchertchian (1983) is a french artist from parisian suburb. He started to paint with a spray can in 2000 with the fatsk crew and through out Europe with Dks Mts Vmd Oneup writers. He continued to find his way of painting on canvas. He finally synthesized the academic art and the street art with the black spray can that he sprays directly on the white canvas, which allows him to paint with spontaneity and intensity. By erasing colours, he studies lines, gestures, and aesthetic qualities inherited from graffiti, working his way toward a form of expressionism. The white canvas provides a virginal, neutral, and industrially impeccable backdrop, on which a line of black paint is «spit». This rough line suggests an ample and physical gesture that uncovers a form of figuration borrowed from an abstract aesthetic. This «spit paint» technique is the result of a long technical study of the handling of the spray can. This technique enables the artist to change the instrument’s primary function, what it produces and what it signifies on the canvas. Thus the artist draws forth paintings that are at the same time sober and romantic, and which thoroughly detail a generations lag. In 2014, he decided to stay in Bangkok.

"Some painters visit a country foreign to them and paint what the locals want to see. Others paint what they actually see and want to show." written by Julie Camdessus for L'Officiel magazine Thaïland.