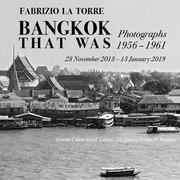 FABRIZIO LA TORRE (Rome 1921–Brussels 2014), Italian photographer and a great art enthusiast, lived in Bangkok from 1956 to 1961. Having come to Bangkok to work in a newly established company, Italthai Industrial, he took a series of photographs in Thailand depicting the everyday life of the Thais at the time. Using a neo-realistic, intimate style which characterises all of his work, in his own country, Italy, or during a 6-month tour in North America, La Torre was able to capture those simple, sincere moments which tell exactly the story of an era.

Bangkok That Was opens with the accompanying catalogue, which is the first book dedicated to the Asian photographs of Fabrizio La Torre. A tender and curious universe to be discovered by all who love Thailand.

RSVP for นิทรรศการ "Bangkok That Was: Photographs 1956-1961" to add comments!