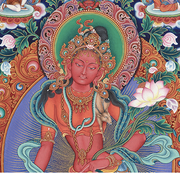 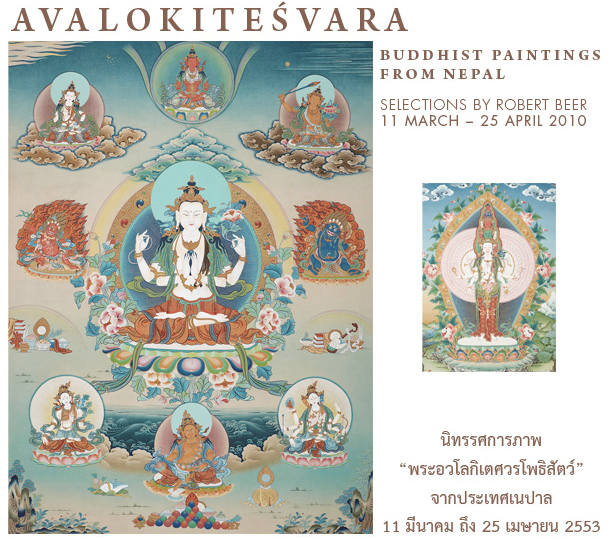 Avalokiteśvara, the ‘Beholding Lord’, is the Bodhisattva of Compassion and the patron deity of Tibet, whose principal emanation is the Dalai Lama, and who is invoked by the famous six-syllable mantra: OM MA-NI PAD-ME HUM. In the Newar Buddhist tradition of Nepal he is commonly known as Lokeśvara, the ‘Lord of the World’, or as Mahakarunika, the ‘Great Compassionate One’, who has a hundred-and-eight different manifestations. And in China he is strongly identified with the Goddess of Mercy, Guan Shi Yin (觀世音), she who ‘Hears the Cries of this World’, who likewise has a hundred-and eight different manifestations.

According to a popular legend Avalokiteśvara once vowed that he would first free all beings from suffering before attaining liberation himself, so he set about this task with great effort. But when he saw how few he had so far saved compared to how many still remained, his sudden despair caused his head and body to explode into many pieces. Seeing his plight, Amitabha Buddha then came swiftly to his aid, and from all the shattered fragments reconstructed his body into a far more powerful form, with eleven heads and a thousand arms, so that he was able to gaze compassionately over all beings in the ten directions and reach out to them with his many arms. Another legend tells how two lakes were formed from Avalokiteśvara’s tears of despair, and from these lakes arose the lotus-borne forms of Green and White Tara.

Avalokiteśvara is the principal Bodhisattva or ‘Spiritual Son’ of red Amitabha Buddha, who presides over the western direction as the ‘Lord of the Padma or Lotus Family’, whose symbol is a lotus. In the Newar tradition Lokeshvara most popular aspect is as Padmapani, the ‘Lotus-bearer’, who stands gracefully upon a lotus-pedestal while holding the stem of a lotus in his left hand. Lokeshvara is usually white or sometimes red in colour, with two, four, eight or a thousand arms, and his characteristic emblem is an antelope-skin that is draped over his left shoulder.

Although this Bodhisattva of Compassion is widely adored and venerated throughout the Buddhist world, many of his unique Newar aspects are still unknown outside the Kathmandu Valley of Nepal. So we have chosen to present some of these rare aspects of Lokeshvara in this exhibition, along with those that are more widely known within the Indo-Tibetan or Mahayana Buddhist traditions.

Robert Beer is internationally-renowned author of the Encyclopedia of Tibetan Symbols and Motifs (Serindia Publications) and a specialist of Buddhist paintings from Nepal. His selections for this exhibition include pieces from living master painters in Nepal. 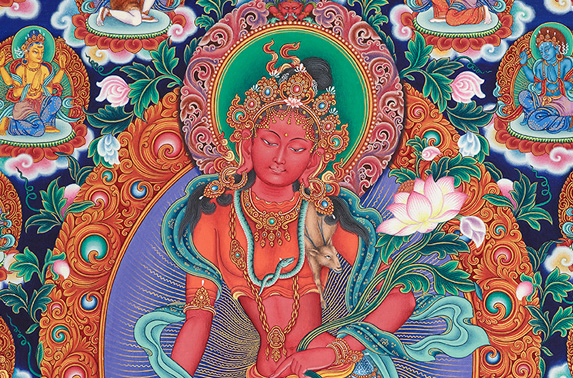