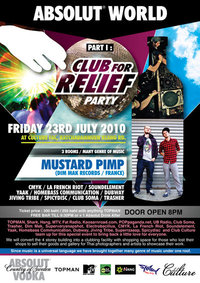 THE MOST SPECTACULAR MEGA PARTY IN BANGKOK EVER ...

We will convert the 4 storey building into a clubbing facility with shopping space for those who lost their shops to sell their goods and gallery for Thai photographers and artists to showcase their work.

Special: photography and art exhibition by Superverysnapshot with Ong Kongpat

>>> Mustard Pimp are the french dynamic duo: Baron and eKa. Baron started 9 years ago DJing mostly acid and techno stuff, whilst eKa was the guitarist in a french metal band. They started to make diverse remixes and rather rapidly received support from well established musicians including the following that they have officially remixed: The Crookers, Steve Aoki, Steed Lord, Partyshank, A1 Bassline, Larry Tee, Dada Life, Stereoheroes, Bryan Cox, and the list keeps growin. Mustard Pimp have released more than 25 mixtapes since March 2008 and have a strong establishment in worldwide blogs. To date, their mixtapes have already been downloaded over 150,000 times,

"The event will be set across 3 amazing areas"


For every ticket sold 100 baht and donation will be given to charities.

RSVP for ABSOLUT World Part I : Club For RELIEF Party to add comments!